Coming up on April 2nd is “World Autism Day,” couched in what some people have designated as “Autism Awareness Month.” Unfortunately, for many autistic people, April has become a month of anxiety due to the darker sides of the “awareness” that is often pushed. There will be “autism walks,” wear blue days at schools and workplaces, and ad campaigns calling for the public to fear autism. Autism will be demonized, blamed for the world’s problems, all while autistic people are called “burdens” and “missing.” Autistic people will be spoken over by parents and professionals who will more-often-than-not spread more misinformation and create further prejudice against autistic people.

All this will be done in the name of “awareness.”

This has been the story every April since the advent of the autism awareness movement in the early 00’s. And it is, at least I believe, one of the largest contributors to many of the societal problems autistic people face.

Because all of this time, people have been pushing for what they claim is autism awareness, but really, they’ve been advocating for autism “bewareness.” Unfortunately, many large autism organizations know that fear is a fantastic motivator to bring in donations. Autism is painted as a boogeyman, with allusions being draw to autism as a thief that comes and snatches away children in the night. Autistic children are described as “missing,” or even dehumanized as changelings. Autistic people are referred to as burdens, with all sorts of wildly inflated statistics going around about how much we “cost” society, both monetarily and emotionally. Our benefits are never given any air time. Only our “costs.” This has resulted in a lot of hysteria surrounding autism. Where has this gotten us? Fear of autism is one of the primary motivators of the anti-vaccine movement, which is one of the most significant potential health threats the western world faces at the moment. Fear is also probably the most common reaction among parents when their child receives an autism diagnosis. This fear leaves them susceptible to all sorts of snake oil salesmen promising to “cure” their child of this scary autism they’ve heard characterized as worse than cancer on the news. The quack autism “cure” industry isn’t only sapping money from family’s pockets, but is also costing children their lives when these “treatments” turn deadly. So often, lists of outcomes for autistic children have “indistiguishability from peers” as the most favorable outcome an autistic person can attain. Not useful life skills, not happiness, but “looking less autistic.” This has led to the development of harmful “therapies” that seek to train autistic people into fake neurtypicals, all at the expense of true functioning. The most overt of these, perhaps, is the still operating Judge Rotenberg Center which uses electric shock therapy and solitary confinement in an attempt to extinguish autistic behavioral expression (even if they’re completely harmless but just “look weird”).

This is where this “bewareness” has gotten us. Ignorance is better than this “awareness.” And, even if these weren’t based on fear, awareness is not enough. I can assure you that the parents who kill their autistic children (and are then defended for it) were “aware” of autism, as are the school bullies, the people that want autistics to not be eligible for organ transplants, and the organizations that give grants to researchers looking for a genetic marker for autism so autistic fetuses can be selectively aborted.

So, I stand in solidarity with much of the autistic community and would like to declare April to be Autism Acceptance Month. For this occasion, I invite all readers including autistic people, parents, friends, allies, teachers, and others, to go Red Instead this April 2nd. Wear red on this day to show support of autism acceptance. The Walk In Red social media campaign that has been going on for a few years now is a great way to get involved, by tagging photos of you wearing red shoes and other clothing items with #WalkInRed to show support for autism acceptance. 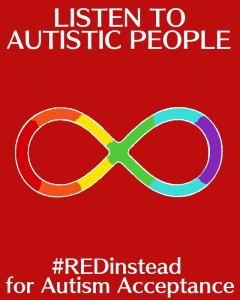 Why red? Well, in many Western cultures red symbolizes love. This represents how we are seeking to change the conversation of autism from one of fear to one of love and acceptance. In many Asian cultures, red is associated with good luck, joy, and celebration. This represents part of the philosophy of Neurodiversity, in that neurodivergences like autism are something to be celebrated as natural variations of human neurology. That although autism is a disability, it is not a bad characteristic or something to be feared or shunned. Perhaps most importantly however, is that the color red is one of the colors that clashes with blue.

Why fight blue? Well, blue is the color that has been associated with much of the autism “bewareness” rhetoric I have described above. The color blue was chosen to represent autism awareness because of the false belief that autism is rare in girls, and since blue is a boys color and autism is a boys condition, autism should be represented by blue. As such, this leaves out the millions of autistic females across the world. (Autism is underdiagnosed in girls because of this prejudice/perception that girls can’t be autistic). Blue is also the color of Autism Speaks, an organization that is abhorred by the autistic community for a multitude of reasons. I have a post coming up for early April about why Autism Speaks does so much harm to the autistic community, but if you’re reading this before then you can search the internet for “autism speaks does not speak for me” and there are plenty of autistic people out there who have written about how atrocious this organization is. The “Light it up Blue” campaign is a marketing campaign for Autism Speaks. So yes, if you light it up blue, you are supporting Autism Speaks. (If you absolutely have to light something up, “Light it up Gold” is a neurodiversity and autism acceptance friendly alternative.)

So, friends, will you join me in supporting autism acceptance by wearing red and/or lighting it up gold? I sure hope so.

And really, red and gold are good colors. They’re the color of my high school!

17 thoughts on “This April, go #RedInstead for Autism Acceptance!”